They live in savannah and floodplains where they favor medium-length grass. These animals can go without drinking if green grass is available, but drink every day or two when grass is dry. 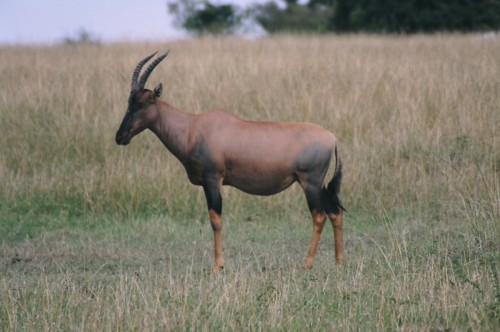 They are build for speed with lean body's and will sometimes jump over each other to get away from a threat.

Being gregarious, they spend much of their life with other antelopes such as wildebeest, and with zebra and ostrich.

These animals are exceptionally gregarious and live in herds of 15 to 20, although in some places, it is possible to see herds of hundreds. They have a remarkable social organization that is linked to the geographic and seasonal distribution of food.

In some areas of the Serengeti and the Mara, topis have large territories within a home range, occupied throughout the year by a male and a small breeding herd of females. Both males and the females cooperate in defending the territory against strangers of either sex.

Males will engage in fights for territory and these are fought by lunging on to their knees while pushing each other to and fro with their horns. 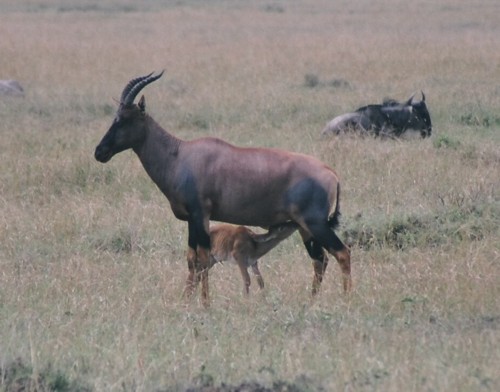 The migrational pattern, adapted to large open plains where they are concentrated sometimes in thousands, allows a sup-population to move together en masse.

They are most active in the morning and evening, resting in shade through the hot hours. In early mornings, spirited tournaments are frequent in bachelor herds.

Good places to see them are in the Masai Mara National Reserve and the Serengeti National Park in Tanzania.

Return from the Topi page back to the Kenya Wildlife List