They call it ‘Tsavo’s best kept secret’. A valid claim, it seems. When we stopped off there on our way to Christmas at the Coast, we were the only guests in this safari camp of 20 tents.
I’m talking about Patterson’s, which is only eight kilometres off the Mombasa Road, to the left and opposite the Tsavo Gate, 290 km from Nairobi and just short of the now defunct Man-eaters Motel, as the road curves upward beyond the Tsavo River.
They call the camp Patterson’s and the main road motel was called Man-eaters because this is the place where a couple of Tsavo lions terrorised the Indian and African workers who were building the railway, killing, according to some reports, more than a 100of them – until the lions were eventually shot by Colonel J.H. Patterson.
For many nights, the colonel hid out and waited for the lions with his gun. He was either very unlucky or a very bad shot – but he was certainly persistent.
A film was made about all this. Its title is: The Ghost and the Darkness – after the two names the railway workers gave to the lions. We watched the video in the bar after dinner the first night... But I am getting ahead of myself.
On the drive down we stopped at Hunters Lodge, still hoping that after 30 years of trying we might get a decent cup of coffee. At least this time there was a better chance of doing so, because they have adopted the "do-it-yourself'' routine with a sachet of "instant'' and a couple of flasks. The water was hot enough – but the stale-boiled milk had large bits of skin floating in it. 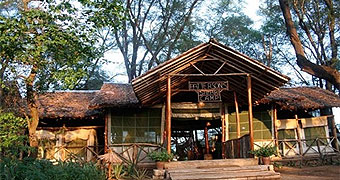 Hunters Lodge is a very run-down and shabby place now. Which is a great pity. Because it has a really advantageous location by a stream and, at a couple of hours’ drive from Nairobi, an ideal place for a late breakfast for early starters or an early lunch for late starters. Sorry to say so, but the lodge must be either carelessly owned or badly managed – or both.
In contrast, Patterson’s is a very tidy place, however rustic, with its wattled walls, thatched roofs, canvas tents and safari chairs – all of them done in browns and greens. And the staff were immediately attentive, with the welcoming cocktails and their friendly words.
The eight kilometres’ drive from the main road is along a twisting and an un-signposted dirt track that runs through dry scrub, until, approaching the high green wall of the Yatta Plateau, you see the line of acacias and palms that mark the course of the Athi River. The camp stretches along the southern bank, where the river curves and exposes broad mud-flats.
At first, the place seemed occupied only by the staff. The only other sign of life was the buzzing fly that kept me awake in my tent when I was trying to rest after the long drive and the heavy lunch. But it was a mistaken conclusion.
After tea and biscuits we took a short drive north along the river. The road was alive with game. Within a range of less than 10 km ten kilometres we counted more than 30 dik-diks. There were two harems of impala and their nearby and no-doubt impatient groups of waiting males. A kudu threesome leapt across the road just ahead of us. And there were waterbuck and a lone hippo at the water’s edge.
The birdlife was prolific – spur-fowls on the road, finches in the thickets, hornbills in the trees, and eagles in the sky...
Back at the camp, the dinner was quite prolific, too. Seven courses, if you include the coffee. It was odd, though, being the only guests that evening – having four waiters with nothing else to do but assiduously watch our every gesture, remove plates and refill glasses.
And after dinner it was the film – a rather melodramatic version of what happened at the railway’s Tsavo River crossing, but quite piquant to be watching it at the actual site. Pity, though, that the film was shot in South Africa! Next morning, the Patterson’s staff did all that you can expect of these Kenyan luxury camps. They woke us up with a cup of tea; they filled the canvas shower tank with hot water; and they served a full English breakfast of juices, fruits, cereals, eggs and bacon, toast and marmalade. Actually, a red-chested cuckoo beat them to the wake-up call – with his incessant "It will rain! It will rain!'' That day he was to be proved wrong.
We drove north through the park to where the Athi and Tsavo rivers join to become the Galana and then encounter the Lugard Falls. It was another reminder of the incredible variety of Tsavo. We stopped, first, upstream of the falls, where the river is still wide and placid. We watched two herds of elephant go down to drink. We listened to the hippos snorting in the shallows.
On the drive downstream to the falls, we stopped to let some unfriendly-looking buffalos make their slow way back from the river. We added a few more names to our trip-list of birds, and we continued our count of dik-dik. (After two days we had 98 sightings – which shows that, in the survival stakes, being small is no disadvantage!)
The Lugard Falls are very spectacular – not in the length of their vertical drop, but in the sound and fury of their tight passage through the clefts in the massive outcrop of rock. The rock is impressive, too – light grey and striped with pink and white. Not a comforting place for animals to come and drink. But there were fisher storks in the less tumultuous spots.
Patterson’s, then, is a good place for a weekend exploring the less-familiar parts of Tsavo, or for a stopover in the drive between Nairobi and the Coast. There is nothing pretentious or phony about it. You will be made welcome; you will be fed well enough – and you will be entertained by the river life.
I hope, too, that I have done them something of a good turn in telling their secret.