Ngugi wa Thiong'o was born in Kenya in 1938 into a large peasant family. As an adolescent, he lived through the Mau Mau war of Independence, the central historical episode in the making of modern Kenya and a major theme in his early works.

As a writer, playwright, journalist and lecturer he has been widely regarded as East Africa's most influential writer. One of Kenyas famous people. His criticism of colonial rule, Christianity and post colonial abuses earned him as much admiration from the public as trouble from Kenya's authorities. Ngugi, as he is usually known, belongs to Kenya's largest ethnic group, the Kikuyus.

Ngugi burst onto the literary scene in East Africa with the performance of his first major play, The Black Hermit, at the National Theatre in Kampala, Uganda, in 1962. In a highly productive literary period, Ngugi published and wrote stories, plays, novels, and a Sunday newspaper column. In that period, his novel, Weep Not Child, was published to critical acclaim in 1964. This publication was followed by The River Between and A Grain of Wheat, a turning point in the formal and ideological direction of his works. In 1967, Ngugi became lecturer in English Literature at the University of Nairobi, eventually becoming Associate Professor and Chair of the Department of Literature. He taught there until 1977 while also serving as Fellow in Creative writing at Makerere in 1969-1970, and as Visiting Associate Professor at Northwestern University in 1970-1971. In 1969, his first volume of literary essays, Homecoming, appeared in print. In the late 1970s, he announced that he would not write in English anymore, to concentrate on writing books in Kikuyu or Swahili only. 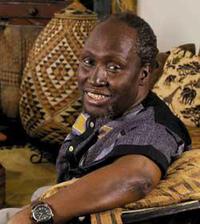 1977 forced dramatic turns in Ngugi's life and career. His first novel in ten years, Petals of Blood, was published in July of that year. The novel painted a harsh and unsparing picture of life in neo-colonial Kenya. It was received with even more emphatic critical acclaim in Kenya and abroad. That year Ngugi's controversial play, Ngaahika Ndeenda (I Will Marry When I Want), written with Ngugi wa Mirii, was performed in an open air theatre in Limuru, with actors from the workers and peasants of the area.

At the end of December 1977 Daniel arap Moi, then vice-president, ordered Ngugi detained in Mamiti Maximum Security Prison. After Amnesty International named him a Prisoner of Conscience, an international campaign secured his release a year later.

In 1982, while Ngugi was in Britain for the launching of Devil on the Cross, he learned about plans of his arrest and imprisonment or worse. He stayed on in Britain, in exile, during the 1980's and moved to the U.S. in 1989. In 1992 Ngugi became professor of comparative literature and performance studies at New York University. He vowed not to return until President Moi stepped down.

On July 31, 2004 Ngugi ended his 22-year self-imposed exile and returned to Kenya where he was greeted by a crowd of thousands.

Beside conducting a countywide tour financed by the East African Publishing House, giving lectures and launching his latest novel in Kikuyu, Muroogi wa Kigogo, which he has worked on for five years; his main mission was to formalize his marriage to Njeeri under Kikuyu rites.

Sadly, after he and his wife were attacked by armed robbers on Aug 12, 2004, his publishers have announced the suspension of his tour.

Nevertheless, on August 28, in the dusty village of Mitero in Thika district in Kenya's Central Province, the traditional wedding ceremony he waited for so long took place.

"There are two things you can never shed: your age-group and your culture," he said, during the ceremony at the humble chief's camp in Mitero.

Ngugi had a traditional marriage to his first wife, the late Nyambura, with whom he has six children: Thiong'o, Kimunya, Nduchu, Mukoma, Wanjiku and Njoki. Apart from Kimunya, an economics graduate from the University of Nairobi, the rest attended US universities. All his children are working, in the US and different African countries. Njeeri has a 24-year-old daughter from a previous relationship with an African-America partner. The couple have two children, 10-year-old Mumbi-Wanjiku and Thiong'o, aged nine years.

The couple and their two children left Kenya for the US on the following day (August 29, 2004) via South Africa. Ngugi was to take up his job at the International Center for Writing and Translation. Njeeri is a counselor in the US.

Njeeri told the press at Nairobi's Jomo Kenyatta Airport that the attack and rape ordeal had actually encouraged her to market Kenya abroad. "Wherever we go, we will be telling people that Kenya is the best place to visit. The attack on us was just an isolated incident."

Ngugi said he would be returning to his homeland "over and over again."

Note: Ngugi has continued to write prolifically and to speak around the world at numerous universities and as a distinguished speaker. These appearances include: the 1984 Robb Lectures at Auckland University, New Zealand; the 1996 Clarendon Lecture at Oxford University; and the 1999 Ashby Lecture at Cambridge. He has spoken in many different countries and held visiting appointments at varied universities including Temple, Amherst, Smith, and Yale. He is the recipient, recently, of the 2001 Nonino Prize. Ngugi's books have been translated into more than thirty languages and they continue to be the subject of books, critical monographs, and dissertations.