Wangari Muta Maathai was born in Nyeri, Kenya in 1940. In 1960, she won a Kennedy scholarship to study in America and earned a master’s degree in biology from the University of Pittsburgh and became the first woman in East Africa to earn a Ph.D.

Returning to Kenya in 1966, Wangari Maathai was shocked at the degradation of the forests and the farmland caused by deforestation. Heavy rains had washed away much of the topsoil, silt was clogging the rivers, and fertilizers were depriving the soil of nutrients. Wangari decided to solve the problem by planting trees.

Under the auspices of the National Council of Women of Kenya, of which she was chairwoman from 1981 to 1987, she introduced the idea of planting trees through citizen foresters in 1976, and called this new organization the Green Belt Movement (GBM).

She continued to develop GBM into broad-based, grassroots organization whose focus was women’s groups planting of trees in order to conserve the environment and improve their quality of life. Through the Green Belt Movement, Wangari Maathai has assisted women in planting more than 20 million trees on their farms and on schools and church compounds in Kenya and all over East Africa. 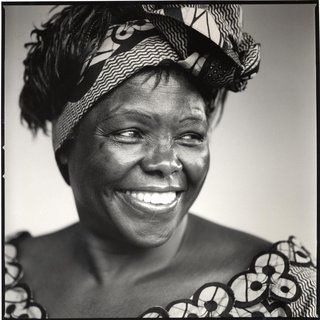 In Africa, as in many parts of the world, women are responsible for meals and collecting firewood. Increasing deforestation has not only meant increasing desertification, but it has also meant that women have had to travel further and further afield in order to collect the firewood. This in turn has led to women spending less time around the home, tending to crops, and looking after their children. By staying closer to home, earning income from sustainably harvesting the fruit and timber from trees, women not only can be more productive, they can provide stability in the home. They can also create time for education opportunities—whether for themselves or their children.

This virtuous circle of empowerment through conservation is serving as a model throughout the world, where women both individually and collectively are entrusted with money and material to invest it in ways that make a difference to their daily lives. Wangari Maathai’s Green Belt Movement is a great example of how one person can turn around the lives of thousands, if not millions of others, by empowering others to change their situation.

Wangari’s road to success was by no means easy. During the 1970s and 1980s, she came under increasing scrutiny from the government of Daniel arap Moi. She was frequently the target of vilification from the government, as well as subject to outright attacks and imprisonment. She refused to compromise her belief that the people were best trusted to look after their natural resources, as opposed to the corrupt cronies of the government, who were given whole swathes of public land, which they then despoiled.

In January 2003, Wangari Maathai was elected by an overwhelming margin to Parliament, where she is the Assistant Secretary for Environnment, Wildlife, and Natural Resources in the democratically elected Kibaki government. Even though she is now being protected by the very same soldiers who once arrested her, her voice on behalf of the environment is still strong and determined.

In The Green Belt Movement, founder Wangari Maathai tells its story: why it started, how it operates, and where it is going. She includes the philosophy behind it, its challenges and objectives, and the specific steps involved in starting a similar grassroots environmental and social justice organization. The Green Belt Movement is the inspiring story of people working at the grassroots level to improve their environment and their country. Their story offers ideas about a new and hopeful future for Africa and the rest of the world.

Wangari Maathai is the founder of the Green Belt Movement and the first woman to earn a doctorate in biology in East Africa. A recipient of numerous awards for her work on environmental and social issues, she was elected to Parliament by an overwhelming majority in 2003 and is currently the Assistant Secretary for Environment, Wildlife, and Natural Resources in the new democratically elected Kenyan government. In 2004, she was honored with the Nobel Peace Prize. She lived in Nairobi, Kenya until her passing on Sep 25, 2011.

Return back to the Famous People from Kenya page