Catherine Ndereba was born July 31, 1972 and has become one of the best female Marathon runners in the world.

As a young girl, something special was at work in this daughter so speedy, she could fetch water in half the time her siblings required. As a young woman, something special drove her to finish training runs that forced teammates, men and women, to drop out.
In the summer of 1998, something special compelled her to leave her husband and 1-year-old daughter to compete for three months in the United States.

And then in October of 2001 in Chicago, something special propelled her to one of the greatest achievements in running history. Six days after Japanese marathoner Naoko Takahashi became the first woman to break the elusive 2-hour, 20-minute barrier, Catherine Ndereba obliterated her world record with a time of 2 hours, 18 minutes, 47 seconds. Everyone on the international running circuit did a double take.

Her remarkable record looks as followed: 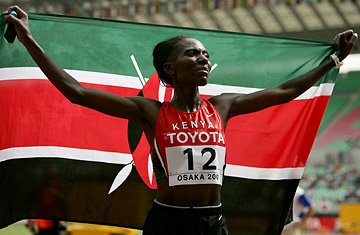 1995 - Represented Kenya internationally for the first time at a women's relay race in Seoul, Korea. Set a 10K personal record, 31:35, at the Richard S. Caliguiri/City of Pittsburgh Great Race.

2002 - Finished second at Boston Marathon behind another Kenyan, Margaret Okayo.

2003 - Finished First, winning the gold metal at the World Championships.

2004 - Won the silver medal at the Olympics in Greece.

Most top Kenyan runners work for the government, but they aren't supported the way athletes from the former Soviet bloc were. They are employed by one of three state agencies -- the police, the army or the prisons -- whose national contests are as competitive as the championships sponsored by the Kenya Amateur Athletic Association, the country's governing body for track and field.

Some runners compete well enough in secondary school to get job offers from these agencies when they graduate. Catherine didn't, but she trained locally in Nyeri for several years and gradually improved. By 1994, she was competing well enough that all three agencies were interested in hiring her. She took a month to decide whether to pursue a running career or try to become a teacher. Once she decided to run, she considered just as carefully her three options.

She couldn't see herself as a police officer or soldier. That left the prisons, about which she knew nothing. Mwaniki's wife ran for the prisons, and she set Catherine's mind at ease. Unlike many former Soviet athletes, Kenyans with government jobs are expected to actually work. So Catherine entered a seven-month training program at prisons college.

Two months after graduation, Catherine represented Kenya in international competition for the first time. The next year, she just missed making the 1996 Kenyan Olympic team in the 10,000 meters, but she compensated by winning so many road races that both Runner's World and Running Times magazines named her Road Racer of the Year.

She meet her husband Anthony at the college and they were married that year as well.

Others have won big races while juggling their careers with family obligations. Several, including 1996 Olympic silver medalist Pauline Konga, have achieved their greatest athletic success after getting married and giving birth. Many are personable, photogenic and popular.

But no one else has combined such a breath-taking performance with an ability to make casual acquaintances feel like life-long friends and a husband who gladly -- and visibly -- supports her career and helps raise their daughter.

This unprecedented combination has turned Catherine Ndereba and her husband, Anthony Maina, into influential role models. They represent the modern Kenyan couple -- and a whole new way for men and women to regard each other in Kenyan society.