This animal is the bulkiest and possibly Africa's most formidable bovid. An adult stands 4.5 to 5.5ft to the shoulder and weighs up to 1 tone.

They are non-territorial, found in large mixed herds with a male dominance hierarchy. The buffalo’s head is broad, with a bare, wide muzzle. The ears are large and rounded, but drooping and fringed with long hairs.

Adult coloration is black or dark brown. Young calves are black or dark brown and smooth-coated but often change to reddish or chocolate brown. Immature have more hair on their bodies than do adults. Horns are present in both sexes, although males develop a massive boss of 2 halves, which meet at maturity around 7 years. During rutting, if two 800 kg bulls charge at 20km/h and collide head-on, the impact is equivalent to a car hitting a wall at 50km/h. Disputes are usually settled after the first full scale charge. (Hughes 1998)

Buffaloes have poor eyesight and hearing but a highly developed sense of smell. 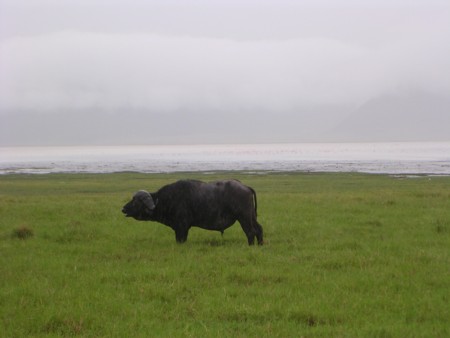 Herds may live in open woodland, but well-watered savannas such as swamps, floodplains, mountain grasslands and forests of mountain regions are favored. Good habitat consists of dense cover like reeds or thickets but one of the major features required is water. They can survive without water for less than two days, but usually drink daily, mainly during daylight hours between noon and dusk. (Mloszewski 1983 and Pienaar 1969) Buffalo are mainly nocturnal except in protected areas.

Grazers, but occasionally browsers, they eat mainly the taller grasses that are too coarse for other grazers. Their wide mouth and tongue are best designed for quantity rather than quality and play a major role in savanna grazing succession. This means they reduce the tall grasslands to the height preferred by the more selective herds such as zebra, wildebeest and warthog. (Sinclair 1977) 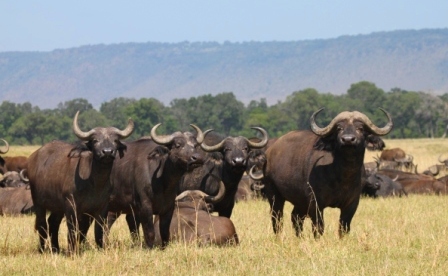 Being gregarious animals their herds may consist of 1,000 members. (Kingdon 1982) - (The great buffalo herds of East Africa were decimated during the Rinderpest epidemic of the 1890's)

Old males tend to be solitary or form small groups of up to 6. Young bulls form bachelor groups.

Herds are usually dominated by a master bull, but are led by an old female. As herds size and resource distribution are closely related, their home range size will vary with the season. Bachelors and solitary males are mostly sedentary, but breeding herds can move up to 17km per day during the dry season for grazing. (Mloszewski 1983)

Herds tend to use known routes between water and grazing and use salt licks to obtain minerals and trace elements.

Adult males take mud baths for protection from biting flies and other parasites and to keep cool however, females and youngsters wallow less, which may suggest wallowing has social significance. Linear dominance hierarchy arranges the herd into groups or clans, which are attached to adult and sub-adult bulls that are also ranked by age, and dominance status. (Mloszewski 1983)

Status in males is being determined by fighting ability, which in turn depends on size and age. This dominance also determines which males will win mating opportunities with females. Females move up in rank when they have a calf at foot. High rank brings the privilege of traveling and feeding to the front and center of the herd. This is the best place for grazing and protection from predation. Low ranking members are at the back and edges of the herd and so suffer much more from predator attack.

Wounded buffalo are considered to be the most dangerous of big game animals because they are known to circle back on their trail and ambush their hunters. (Hughes 1998) 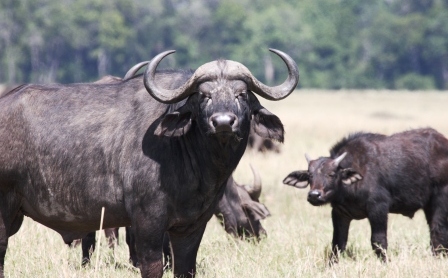 Being seasonal breeders, a female will mate at around 5 years and the gestation period is 11 to 11.5 months. The newborn calf weighs between 40 - 45kg. Females remain with the herd when they give birth, but they may be left behind, temporarily if the herd moves on before the calf is strong enough to walk and keep up. Calves have been known to be on their feet in 10 minutes, but it can take several hours before they are strong enough to follow with the herd and do remain uncoordinated for several weeks. (Sinclair 1977)

In this situation the cow will hide her calf in thick cover, while she feeds nearby. The calf will suckle at irregular intervals, sometimes right up to the next calf being born, however, the cow normally stops lactating during the seventh month of pregnancy, when the current calf is around 10 months old, when weaning begins. Despite occasional horn-jabs, the yearling offspring will still tag along with mother and new calf for one more year, or sometimes longer. (Mloszewski 1983 and Sinclair 1977)

Social ties are strong between the female calves and their mothers, but males disperse into the body of the herd as they age. (Estes 1992)


Buffaloes appear to have several calls, most of which resemble those of domestic cattle, but are of a lower pitch. A calf’s distress call will often trigger a mobbing response from other clan members.

The buffalo is a large and heavy animal but it is capable of an estimated top speed of 48 -56km/h (Mloszewski 1983), and a healthy buffalo is able to outrun lions; their main predator, other than man. Other anti-predator behavior can be wheeling or flight, stampeding and individual or group attack. Lion cubs are often killed by buffaloes; trampled or gored to death


Return from Buffalo Pictures back to the Kenya Animals page